Includes over 100 VSCO Inspired Analog Film Lightroom Presets developed to reproduce the aesthetics of vintage cameras. Remember the good ol’ days? Kodak film, Agfa Vista, Portra film, Fujifilm; choose your favourite and start creating photos as if they were shot during those times. 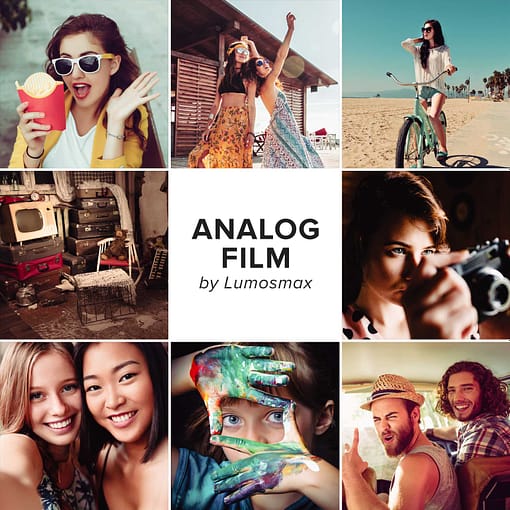 The Idea Behind Our Presets

With companies like Kodak and Fujifilm becoming household names, rising in profit in the mid-2000s, it was the inventions decades before that made them most famous. These inventions were film cameras, and they came in many shapes and sizes. Over the decades, these devices have shaped the way we capture and share our memories. From what started as a simple pinhole camera in the early 1500s to now where digital cameras reign supreme, film is, unfortunately, taking a backseat. This is exactly why we created our analog film Lightroom presets.

To the die-hard fans though, 35mm film is still current. Many traditionalists live by the hashtag #filmisnotdead, and they will go to incredible lengths to secure a declining roll of 120 or 35mm for their beloved film camera.

What’s exciting to see is the resurgence of film cameras – looking across the buyers of film, many flock to older style rangefinders or even Konica C35 AF film cameras from 1978. Whatever the case though, their film cameras express their passion for film color and its legacy to be different from digital.

Analog Ragnarok is a vivid realisation of analog devices emulated in a single powerful editing software through an amazing set of presets. It allows you to create photos like the way they were meant to be.

There is a Beauty in the Loss of Clarity…

It is true that in a certain way, imperfection is vital in the art of photography. These presets have been developed and crafted in a way you would not expect from any kind of film emulator. Don’t worry, you don’t need to go through the expensive auction to get those old cameras. Thanks to the magic of Lightroom, we are not just able to add details but also remove them. With our analog film Lightroom presets, you can create photos that are just rich with imperfection. Talk about that grainy perfection! It’s time to shave off digital details and bring back all those perfect imperfections.

We can finally embrace the aesthetics of film cameras in a new modern format. Analog Ragnarok includes more than 100 Lightroom Presets developed to recreate the essence of Photos taken using vintage Kodak film cameras. The texture of the skin that just ‘Pop’, photos with perfect hint of grain unapologetically become essential. VSCO Inspired; but with the power of Lightroom.

You may have heard about VSCO, the popular camera app in the Appstore and Google Playstore. Think of Analog Ragnarok as the ultimate version of the app utilising the heavy powered Lightroom. Optimise your RAW photos with the familiarity of using VSCO but with more capabilities.

Traditionalists love the look of film over digital photos. Why, might you ask?
Because for many film camera users, each frame creates a unique look which differs from roll to roll. The main reason for this is due to the construction of the film itself.

Unlike the digital Bayer type sensors found in digital cameras which have a repetitive pattern of red, green and blue pixels, film has an entirely random crystallized structure. The resulting photo looks unique in grain and color because of the unique architecture. Brands like Kodak and Fujifilm capitalize on uniqueness to expose new ranges of differentiating color films.

If you were to pull apart film and look at the construction, you would notice it’s transparent plastic nature. Film is made up of multiple layers which are covered in a collagen emulsion and light-sensitive silver halide crystals. It’s the random construction of these crystals that makes a film look better than a digital image.

The Difference Between Films

Every film is constructed almost in the same process, but manufacturers often try to obtain a different look to every film. Kodak film, for instance, is well recognized for portrait photography due to warmer skin tones, whereas Fujifilm Velvia promotes greens and vivid colors in landscape photography.

If you have ever come across a photographer shooting film at a fashion show, then they are most likely using Porta film. This is because of the fine grain plus excellent daylight temperature and high dynamic range. Agfa Vista, on the other hand, is similar to Porta film but creates more of a cooler tone and is often referred to as the ‘cheaper’ Portra. It’s look is still sort after, but unfortunately, most of the Agfa Vista film is no longer in production.

An example of Portra Preset in our pack : Here’s the Ilford Preset in our pack : Not ready to buy? Try our free presets.

We have included our Fuji preset for free in our collection pack through Adobe Exchange. Learn more about the rest of our presets on our website.